Citation: ““for his longstanding contributions in dynamic decision making and his modern pioneering work in models of quantum cognition.” 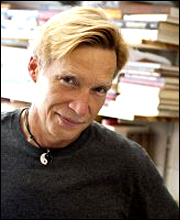 Jerome Busemeyer has for a long time been one of the world’s leading researchers in decision making. His influential decision field theory is a dynamic and stochastic model of decision making designed to describe the variability of human preferences and how these preferences evolve across time. The theory provides an elegant account of decision making under risk and explains a host of intriguing decision paradoxes.

More recently, during the past five years, Busemeyer pioneered a brand new theoretical approach for understanding the failures of humans to make decisions on the basis of ‘rational’ principles. His new approach views human cognition as being governed not by the standard probability theory but by a probability system borrowed from quantum theory. His quantum-cognition approach involves systematic application of this alternative system of probability to explaining human decision making in the social and behavioral sciences. Beyond demonstrating that the new theory predicts many of the research findings that have been problematic for ‘rational’ models, he has developed new and systematic empirical tests that are directly motivated by the new approach and that provide remarkable support for it.

His applications and tests of his quantum-cognition theory have appeared in diverse settings, including effects of categorization on decision making, the nature of probability judgments, similarity judgments, and measurement order effects. The new ideas have been hugely influential, sparking international conferences, special issues of journals, and major books. Jerome Busemeyer was vital in starting a new and exciting branch of our field.

Tonight, for his longstanding theoretical and empirical contributions to our science and his new pioneering work, the Society of Experimental Psychologists awards the Howard Crosby Warren Medal to Jerome Busemeyer.

Citation: “for his pioneering theoretical research on how brains give rise to minds and his foundational contributions to computational neuroscience and connectionist cognitive science.”

Over the course of his remarkable career, Stephen Grossberg has been a major pioneer and leader of theoretical research on how brains give rise to minds and how technology can emulate biological intelligence. Grossberg’s research is highly interdisciplinary, combining elements from neuroscience, psychology, applied mathematics, computer science, physics, and philosophy. In the 1960s, Grossberg began using systems of non-linear differential equations to model short-, medium-, and long-term memory.

This work proved foundational to computational neuroscience, connectionist cognitive science, and many approaches to neuromorphic technology. Grossberg discovered design principles and neural architectures that clarify how the behavior of individuals, or machines, can adapt autonomously in real-time to unexpected environmental challenges.

Tonight, for his many significant theoretical contributions to computational neuroscience and experimental psychology over the course of a distinguished career, the Society of Experimental Psychologists awards the Norman Anderson Lifetime Achievement Award to Stephen Grossberg.