Citation: “for his pioneering methodological and empirical contributions to our understanding of the neural mechanisms of human cognition” 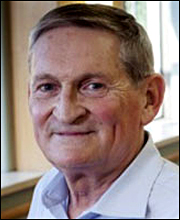 Robert Knight has been one of the most important figures in cognitive neuroscience during the past 40 years. His work has provided deep insights into our understanding of the neural mechanisms of human cognition, and he has spearheaded the development of a number of major methodological advances that continue to shape the research agenda in our field.

Knight’s research explores the neural underpinnings of human cognition, with a primary interest in the contributions of the prefrontal cortex. He has developed groundbreaking methods for studying patients with focal neurological lesions to reveal the functional architecture of human cognition. This includes the use of surface-based electrophysiological recordings (EEG) and more recently he spearheaded a new methodological revolution in cognitive neuroscience via his work with electrocorticography (ECoG), in which recordings are made from electrodes implanted on the exposed cortical surface during neurosurgery.

Many of Knight’s publications are classics in the field, providing major insights into how prefrontal cortex supports networks of cognitive control in healthy individuals, and how these networks reorganize following neurological insult. As just a few examples, he provided the first clear evidence that patients with prefrontal damage have elevated sensory responses to irrelevant stimuli, and he demonstrated, at a mechanistic level, the importance of prefrontal cortex in the selection of task-relevant information, a critical component of goal-oriented behavior. His work on patients with lesions of the temporal-parietal region provided a striking demonstration of the differences in local/global processing between the two cerebral hemispheres. His more recent work in this tradition has focused on the comparison of lateral and orbital subregions of the prefrontal cortex in various aspects of cognitive control such as working memory, selective attention, action monitoring, emotion, and decision making.

Knight’s ECoG work has important translational potential in the development of brain-machine interface systems, and represents a significant step towards restoring function in patients who have lost the ability to control movements or produce speech. For example, in the language domain, Knight and his colleagues have demonstrated remarkable initial success at developing a speech decoder that has the potential to restore language ability in patients who know what they intend to say but cannot produce speech output (such as ALS or aphasia).

Today, for his many significant empirical and methodological contributions to the study of the neural mechanisms of human cognition, the Society of Experimental Psychologists awards the Howard Crosby Warren medal to Robert Knight.

Citation: “for her groundbreaking theoretical and empirical work on foundational human thinking skills and how to devise powerful learning tools that augment them to enable deeper insights.” 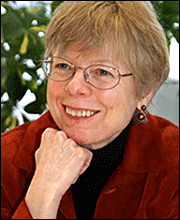 The central theme of Dedre Gentner’s research program has been probing the power of reasoning by analogy, including the use of metaphor. A central idea in analogy is the alignment of two structures. She has found that comparing two spatial structures promotes a structural alignment process that renders the common relational structure more salient, and that highlights crucial differences. These principles can work both for children and for adults to help learners extract key spatial and causal principles from examples. A closely linked and yet distinct over-arching theme is relational language and its development. Her work on verb meanings and the semantics of other kinds of relational language has shown the power of language to augment thought. She has systematically addressed questions concerning how particular languages (and cultures) carve up the space of possible relations and other conceptual domains. She has also collaborated on devising and testing computational models of analogy, relational language and sketch understanding; these models can perform at human levels and in human ways on tasks such as Ravens’ Progressive Matrices.

Today, the Society of Experimental Psychologists honors her lifetime of contributions by presenting the 2020 Norman Anderson Lifetime Achievement Award to Dedre Gentner.